(This post was written by François and originally published on his personal weblog.) 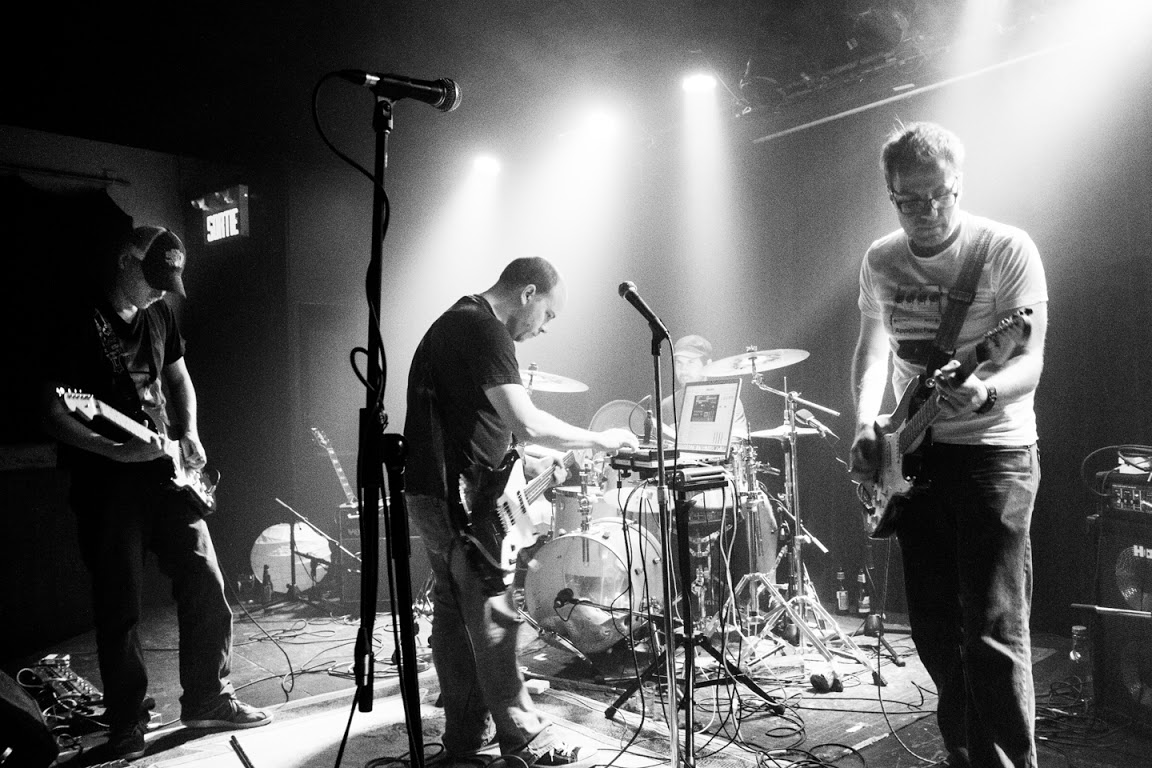 (Thank you Guillaume Turgeon for this picture.)

When I play with Echoes from Jupiter (fine, artisanal, single-barrel post-rock from Québec), it’s not unusual for someone (full disclosure : usually me) to exclaim “isn’t it amazing that we amateur musicians get to play with recording tech that would have flabbergasted The Beatles?”.

I’m not only saying this to prove that I’m a huge Beatles geek : I find it truly awe-inspiring that we can use simple computers to create multitrack recordings. I briefly touched on this when I talked about one of our shows (which we self-bootlegged with three iPhones), but allow me to elaborate on what we’ve been up to since this concert.

Mainly, we have composed and stage-tested a few new songs. As you know, “songs” is quite a misnomer for what we do. We don’t work with lyrics, nor with verses and choruses. We rely on scribbled notes and on our memories to structure movements. 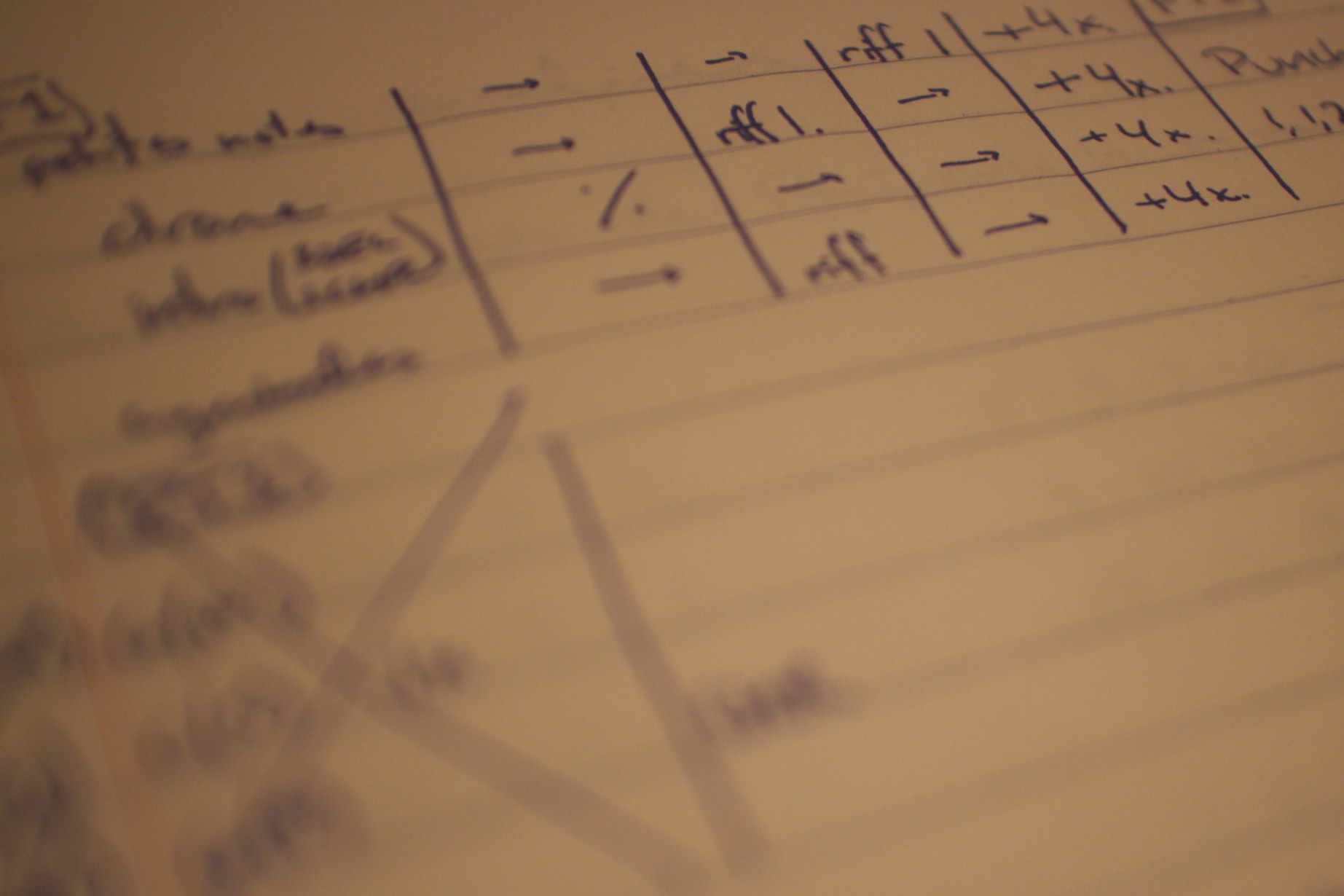 The best way we found of working things out is that we tape about half of what we do during jam sessions and have a listen at home. As much as I’d listen to almost any studio outtakes of some of my favourite artists, I don’t wish an exhaustive listening session of these long, low quality recordings to anyone.

After a lot of these jam sessions, we settled on structures for each song, complete with chord progressions, arrangements and tempos (for some tracks, we tried five or six different variations of five BPM increments). These decisions were rendered official when we recorded them on audio guides recorded with a prosumer audio interface and cheap microphones. 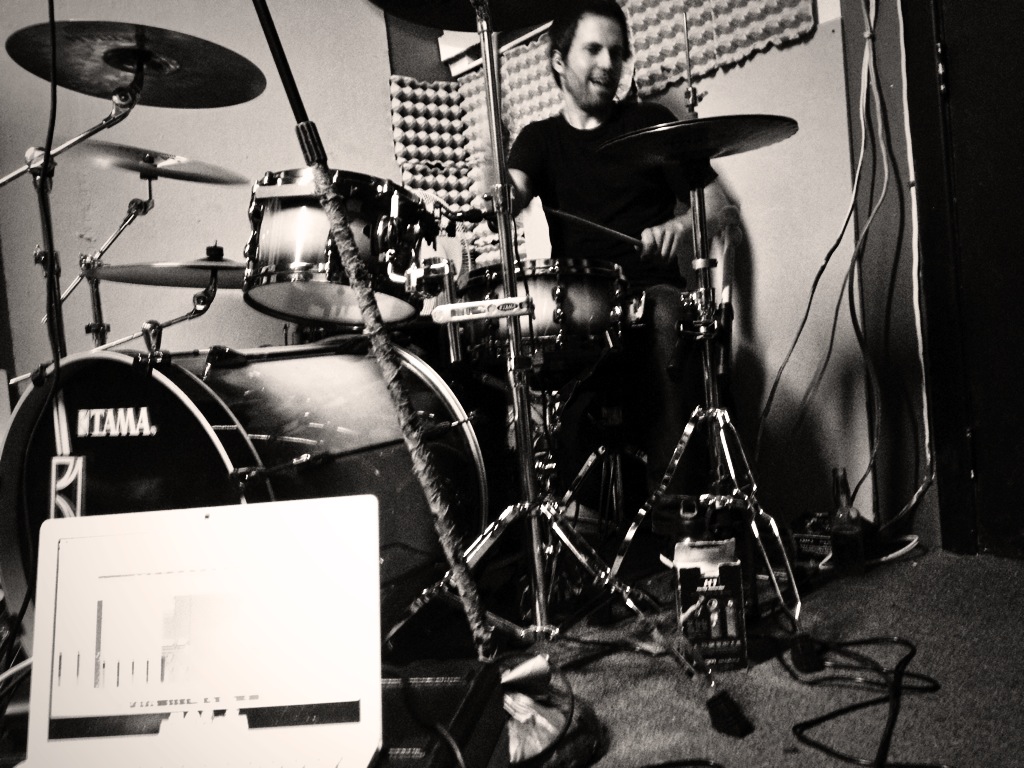 Before going further, let me say that Steve is not only really good with Logic Pro, he’s also extremely motivated when he’s working on our material. He then proceeded to edit these guides to add clicks and other audio cues so as to help us when we’d record the real tracks.

With the help of Steve’s friend, the producer Dave Boisvert, we were able to use a well-furnished home studio to record. Mathieu was the first one to go : he took only two nights to record every drum sound that would be on the album. 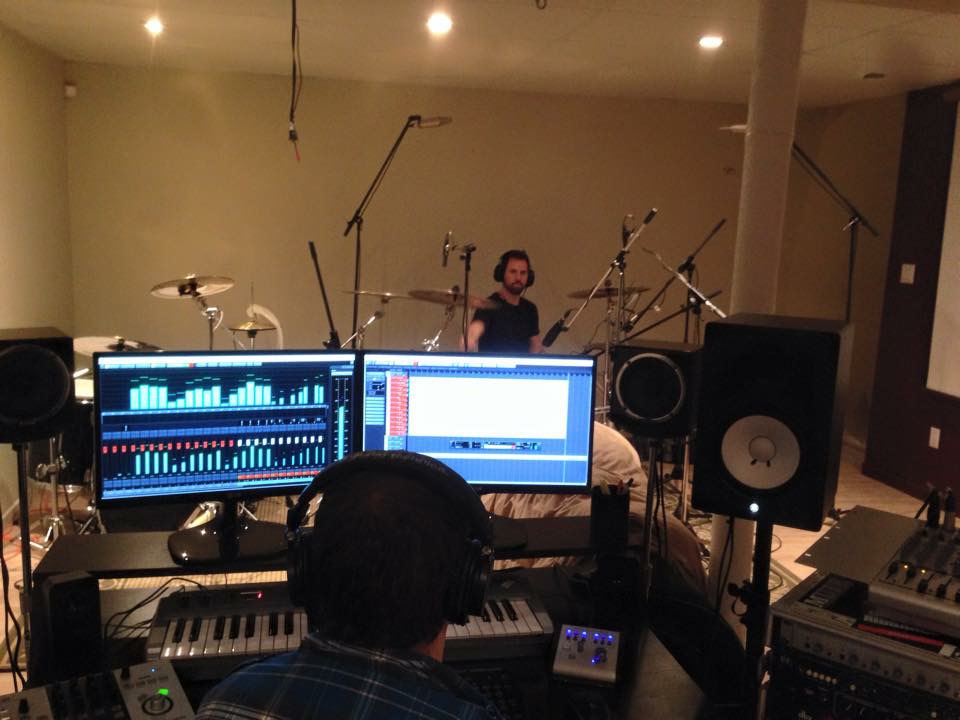 Now that we had a solid basis to play on, I also took two nights to play my bass tracks. As an amateur musician, I think that was the most stressful non-concert moment of what I can call a “career” : having to play perfectly a part that I composed in front on the guys, knowing every mistake meant having to spend more time to re-record or to edit later. That and the feeling of shame from not having rehearsed enough individually. Anyway, I think I did OK. 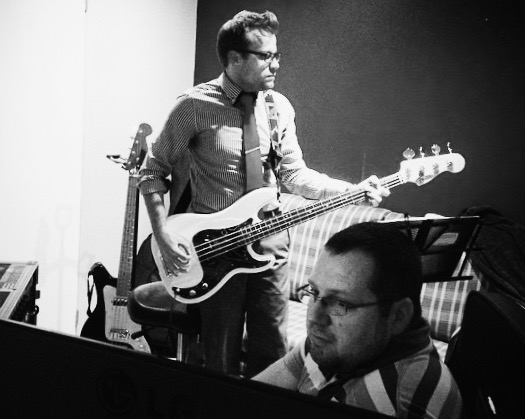 I don’t mean to say that recording drums is easy, but after my bass guitar tracks (fairly easy : I only used a preamp that was fed directly in the console), Mathieu’s guitar parts were quite a job. He uses a lot of effects and relies on natural sounds from his amp, so the recording process implied more care in isolating the sounds produced by human bodies in the room (bad) and those coming out of his amp (good). 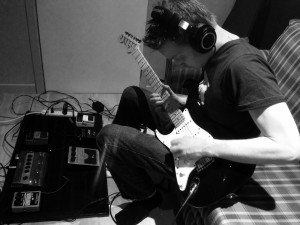 As I write these words, I’m listening to something really special : a very, very rough mix of Mathieu’s drum parts and my bass tracks, along with some of Mathieu’s guitar parts. Here’s for your ears only, a really short preview :

To hear the songs we’ve spent months and months jamming, composing, altering, reorganizing and tweaking in such an new, embryonic state is refreshing and perplexing. My mind can’t help but silently overdub the tracks with what I remember Steve’s and Mathieu’s other guitar parts to be, but I’m drawn back to the core of the songs : their basic structures, their chord progressions, ever so slightly changing throughout the song, and the creative drum patterns Mathieu agonized over for so long.

It seems we’ll get this done, after all. It seems that five years will have been the right amount of time to work on this.

The title of this album will be Kosmonavt.

The thing with post-rock is that, for most people, it tends to be an acquired taste. I won’t blabber for long about “the things you don’t hear on the radio”, but there is a truth to it.

When we released Europa in 2010, we didn’t know who would like it. We went big (promotion-wise), we went long (time-wise) and we went arcane (song-title-wise). We tried to get post-rock and indie outlets to give us a listen. Québec’s independent scene has provided us with amazing encouragements (someone at an indie record store decided to play the album in the shop, which led a critic from Le Devoir to review it).

We sold the album through iTunes and other online stores, but I think that a small thing that made a difference is that we pirated it ourselves : as soon as we read on a forum that someone asked for a torrent of Europa, we uploaded and seeded it. Either way, we thought, there was no way we could get the world to buy it, but they might as well give it a listen!

Once-leading streaming service Last.fm has this cool little feature named Scrobbling : thanks to a plugin, it detects what its users listen to (even with another app) and shares it on the Web. As you can see on our artist page, people from everywhere in the world listened to Europa. Seeing people from Germany and Russia enjoying our album is a real thrill. In this way, we think it’s a success.

Our collective wallet disagrees : honestly, we didn’t sell a lot of copies of Europa. This isn’t that bad, as we all have good day jobs, but it begs the question : do we try, for the next one, to print CDs?

The campaign launches today. If you’ve made it through this long article, I invite you to take a look at the campaign, share this post and the campaign link to friends and help us get this album done!